Головна › News › Cost of the populism

Cost of the populism

Importing natural gas means spending a great deal of hard currency and places considerable pressure on the hryvnia. From 2006 to 2015, imported gas cost Ukraine US $87.9 billion. By comparison, the combined public and state-guaranteed debt added up to only US $66.6bn as of August 2016. The question then is: what would have happened with the country’s external accounts and, therefore, the UAH exchange rate, if market prices for gas had been introduced back in 2004?

The first consequence is that extraction of domestic natural gas would rise. According to NAK Naftogaz Ukrainy, if market prices had been introduced in 2004,1 by 2015, domestic extraction would have reached 38.0bn cu m, which is even more than domestic demand. For instance, in 2015, Ukraine consumed only 33.7bn cu m, leaving a surplus that could have been exported.

1 And assuming that all the extra revenue is invested in further extraction because market prices have been set for natural gas. 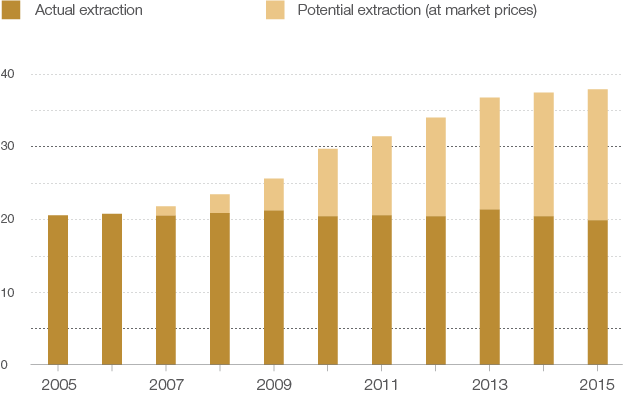 The second consequence is a reduction in domestic consumption of natural gas. According to a study by the Oxford Institute for Energy Studies called «the Ukrainian residential gas sector: a market untapped», market prices would cause consumption to go down at least by 5.7bn cu m. If the country invested in energy efficiency, consumption could be cut back an additional 0.9-3.0bn cu m. 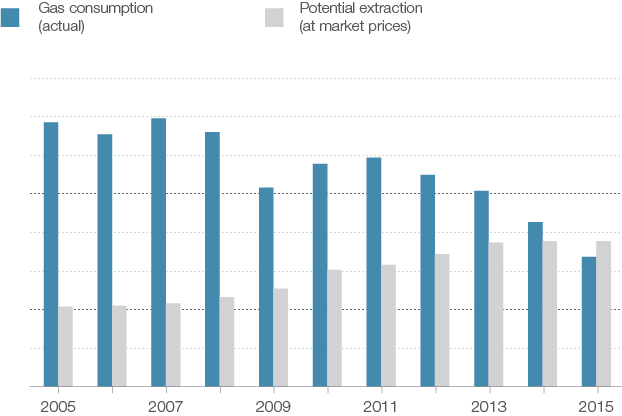 The third consequence is a significant saving of hard currency reserves. Even if gas consumption does not fall as steeply as assumed in the Oxford Institute for Energy Studies2 report and no efforts are made to become more energy-efficient, the savings in hard currency alone with market prices is huge: our estimates are close to US $40bn between 2006 and 2015. By comparison, Ukraine’s hard currency reserves were only US $15.6bn as of the end of September 2016.

2 To simpify calculations, the assumption is that a market price for natural gas will lead to a reduction in consumption of on average 4.0bn cu m per year. 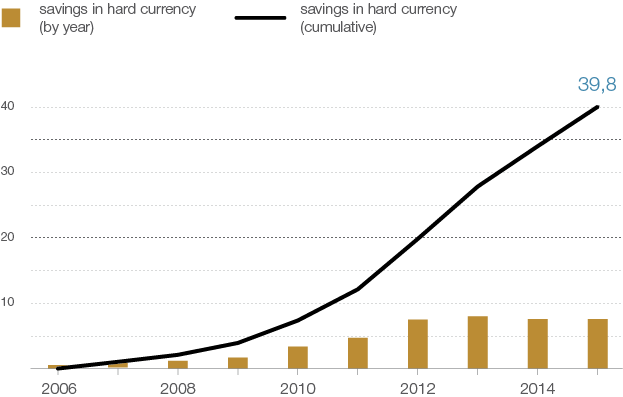 How would the life of ordinary Ukrainians turn out if domestic prices for natural gas had not been artificially low? One thing that must immediately be stated is that the market cost of gas would not have saved Ukraine from the currency shock of 2008. The collapse on world markets left Ukraine, with its tiny open economy, with no alternatives. In 2014-2015, however, the situation could have turned out quite differently.

First of all, with market prices for natural gas, the country’s currency reserves 3 would have grown to an impressive US $48bn by the end of 2013 or 5.9 months of imports, compared to the US $20.4bn or 2.5 months of imports that Ukraine actually had at the time.

Secondly, the deficit in the balance of trade would have been very different: our estimate is that the current account deficit would have been only 4.6% of GDP or US $8.5bn, instead of the 9.0% of GDP or US $16.5bn that Ukraine had just before the currency shock of 2014. Under the circumstances, both investment activity or FDI and policy decisions themselves would have been completely different. It’s unlikely that Viktor Yanukovych would have turned down European integration with these kinds of reserves.4 Nevertheless, for the purpose of evaluating the exchange rate, the assumption is that everything except the balance of trade remained as they actually were.

3Assuming that the NBU’s exchange policy remained unchanged, supporting a fixed exchange rate. 4 The change in volumes of imported natural gas would also have been reflected in the GDP by reducing the share of net exports. In addition, the market price for gas would also have an impact on economic agents. Still, to simplify calculations, these factors were ignored. 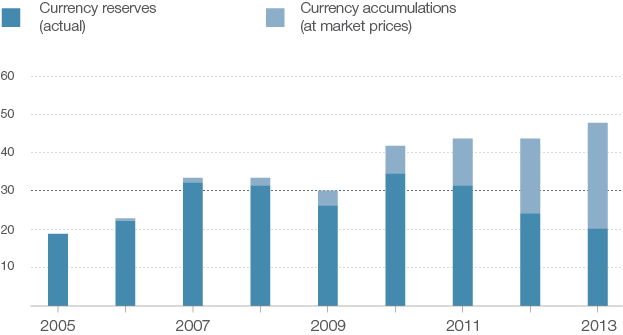 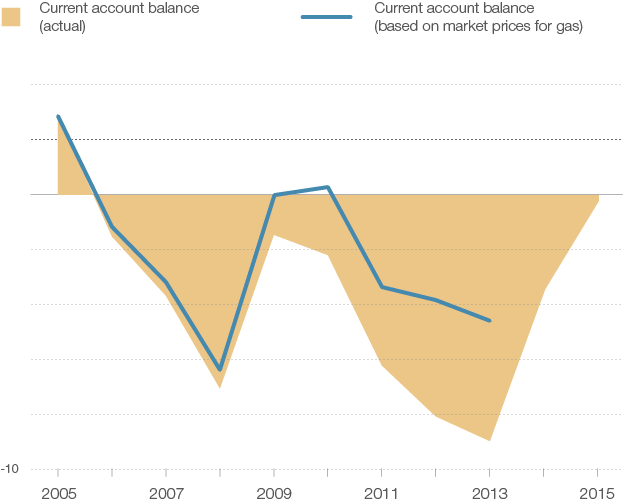 So, what would the hryvnia be worth if gas weren’t subsidized? CASE calculations show that, after part of the country was occupied and economic ties to Russia effectively cut, the hryvnia would have stopped falling at UAH 18.50/USD. Devaluation was unavoidable given that export revenues began to fall sharply because of the geopolitical situation. Nevertheless: (а) The NBU would have been able to flood the market with hard currency, since it would have had more than double the reserves: capital flight in dollar terms in 2014 was only US $13.3bn, whereas reserves would hypothetically have been US $48bn; (b) huge reserves—and interventions—would have contained speculative attacks by individual depositors and the outflow of hard currency from the banking system. This, in turn, would have saved a large part of the system; (c) the actual trade deficit would have been half as much, which would have made the task easier. In addition, Ukraine would have stopped importing gas from Russia by 2015, as domestic extraction would have easily covered domestic demand.

Under these circumstances, a 2-3% of GDP current account deficit would have made it possible to prevent a further devaluation of the hryvnia: it would have stopped at around UAH 11.00/USD in 2014 and at UAH 18.50/USD in 2015.5.

In other words, had prices for gas not been artificially low, the average salary today would be around US $300 a month, and not US $200. The average pension would be around US $100 and not US $66. Many Ukrainians would have been able to hang on to their savings. Meanwhile, energy efficiency and investment appeal would have brought new jobs and push up wages. So, Ukrainians’ choice is clear: either pay less for gas or have a stable economy with open opportunities for all to develop and earn.

5The calculation is as follows: a certain proportion of hryvnia is spent by both business and ordinary Ukrainians on non-energy expenditures. This sum in UAH will inevitably be spent on imported goods, no matter what happens, and the exchange rate merely regulates how many imports will be bought for this money. How much Ukrainians spent on imports over 2014-2015 is a known quantity, and energy import and exports are also known: the hypothetical exchange rate is defined as the parameter that reduces the monetary aspect of non-energy imports to the level at which the current account deficit is around 2-3% of GDP. The formula for this calculation is C/A$ = Exp$ – (EnergImp$ +(NonEnergImpuah/ExchRate))+BalanceIncTrans$, where C/A$ is the current account balance in USD, Exp$ is exports in USD, EnergImp$ is energy imports in USD, BalanceIncTrans$ is primary and secondary revenues in USD, NonEnergImpuah is non-energy imports in UAH, and ExchRate is the UAH exchange rate. 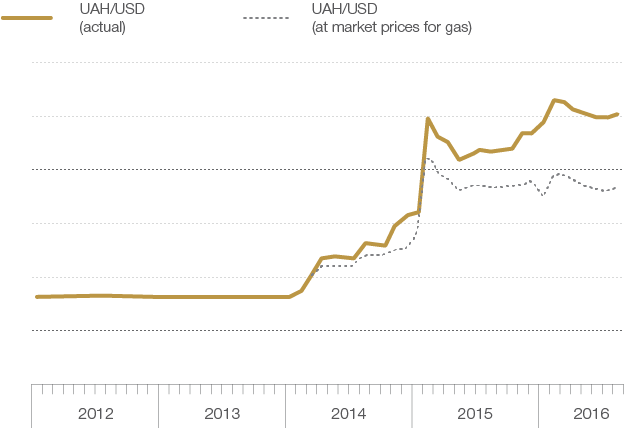 CASE Ukraine’s calculations have been highly simplified, without taking into account a variety of interconnected elements, such as the impact of market prices for gas on the structure of the economy, potential investments in different sectors, and so on. During the course of analysis, it became clear that market prices would have a much broader positive impact, not just on the hryvnia exchange rate. But we leave that part of the analysis for further study.

News
The best of 2016!
CASE Ukraine published its 2016 annual report in English. https://issuu.com/case.ua/docs/annual_report_2016
News
Stories from the province, or how Omelnyk village earnerd money
How a village can find money to build new roads and kindergartens? How can it increase its budget? How can[…]
News
Anatomy of the chronic hryvna devaluation
1. In the years since the country became independent, Ukraine has become part of the global economy: the penetration of[…]
News
How to limit “free” medical services efficiently
Read in our article how different countries solve the dilemma between the growing needs in medical services and limited state[…]
Більше схожих новин
Залиште ваші контактні дані і наш консультант зв'яжеться з вами